The sugar glider generally makes five sounds, and this article will explain the meaning of these sugar glider sounds. Most people think that cats only meow, but they can make many different sounds, such as meowing, gasping, purring, and purring, and each sound has its meaning. Understanding these implications is essential for scientific breeding.

The first sound is the continuous creaking sound, similar to sawing wood, when a sugar glider is afraid, nervous, and stressed. The sugar glider who is not very close, or the sugar glider who has just arrived at the new home, will make this sound when you try to get close, and they will also assume a defensive, offensive posture. The sugar glider will hit the person with his fist or bite if you still insist on approaching at this time.

There is also a situation where the sugar glider is disturbed while sleeping, making this crunching sound express discomfort.

The sugar glider makes short chirps, similar to a mouse when it is in pain. When two sugar gliders play and fight, if one bites the other, it will make this kind of short-syllable cry. If the fight is intense, the suppressed one will also make the sound like the first listed in the article.

If you hear such a cry, you should check it out, pull the two sides apart if necessary, and let each other calm down. If the female sugar glider is bullied too much, you can catch the male and put him in a small cage for a day because he is sometimes anxious during courtship.

This sugar glider sounds between “coo” and “woo,” can be heard in the baby or young sugar gliders and can also be heard when moving toward a parent or pet owner.

I was wondering why the sugar glider made a cooing sound. Only a few of my friends who raised sugar gliders said they had heard such a sound, and it also came from a newly-weaned baby glider.

We have made a reasonable guess that the sugar glider wants to be protected quickly and gain a sense of security, makes this cry when crawling to the owner to express anxiety and urgency, and wants to be a relative of the owner.

The 4th of sugar glider sounds: Sound like a jet

It isn’t a mouth call, but all sugar gliders do, so it has to be said.

The snorting sound that cats and dogs make when they have a cold is similar to humans’ snorting sound. When sugar gliders lick their hair and clean their bodies, the sound is usually called “bump” or “puff.”

Some novice breeders will be concerned about whether the sugar glider catches a cold or another illness. Don’t worry; it is normal if the sugar glider only makes this sound when licking the hair. That is the sound of the sugar glider spitting saliva, which is “spitting.” The purpose is to wet the coat and forelimbs to facilitate their cleaning, like taking a bath.

If sugar gliders make this sneeze-like sound when they don’t clean their bodies, then it’s probably a cold.

The 5th of sugar glider sounds: Sound like a dog barking

The barking sound of a sugar glider is very similar to that of a puppy. Most of my friends who keep sugar gliders have heard this kind of call, which sounds funny.

Senior breeders claim that dog barking is communication between sugar gliders. It happens between multiple gliders. If you only have one sugar glider and it barks in the middle of the night, that’s a sign that it’s lonely. You would better play with it for a while.

After reading the five different sugar glider sounds and the meaning of these sounds, I hope it will help you in your future breeding journey. 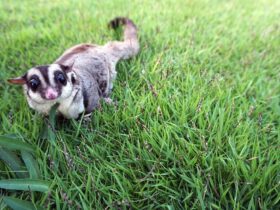 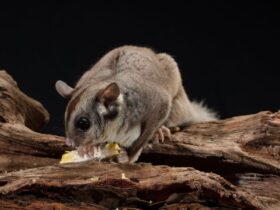